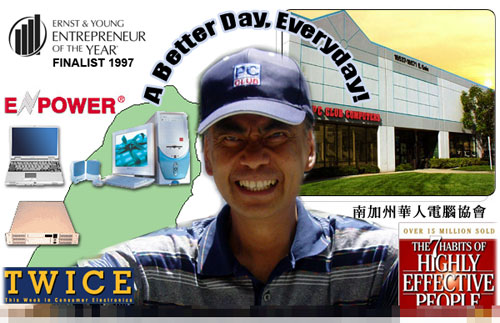 Jackson Lan was the visionary who founded PC Club. He opened his first PC Club store back in 1992 with City of Industry location, mainly with funds he received from selling his house in Taiwan. He was the president of the Southern California Chinese Computer Association from 1993 to 1994, and his contacts with multiple vendors in the United States and overseas allowed him to form good vendor relationships.

His vision for PC Club was summarized with the company’s mission statement: "To focus on Customer Values by offering Quality Computer Products and Services in the Most Effective and Innovative Way to Computer Professionals." His target audience was the technical people that most people look for technical help like fixing a computer or setting up a network. For these computer professionals, the PC Club stores offered plenty of computer parts and peripherals and were staffed with employees passionate about computers to help them.

​With his guidance PC Club went from a single store in Southern California to 60 store locations across the nation with over 700 employees. He wanted to be in touch with his customers so PC Club organized many road show events where he personally met with resellers and customers to find out what they wanted. His success allowed him to be a finalist in 1997 for Ernst and Young Entrepreneur of the Year.

Jackson Lan personally believed in the principles from Stephen R. Covey’s The Seven Habits of Highly Effective People. Everyone from PC Club headquarter were encouraged to read the book and some were to present a report on a chapter during the weekly meeting. He encouraged employees to better themselves both in health and mind.

He applied his “A Better Day, Every Day” principal during his fight with cancer. He approached it with a positive attitude and always believed in beating it. For a period of time, it seemed that he had fought off the disease. Sadly it came back and on December 23, 2005, he lost the battle with cancer and passed away in the City of Hope hospital at the age of 55.
​"A Better Day" means: stay healthy, be happy and have achievement.
References:
External Links: